I am not sure if I have stated this enough but I currently work for Towers Watson. I am a software engineer and I really enjoy what I do. There are sometimes where I can get fairly frustrated with what I am working on in or out of work but for the most part I come out with a desire of wanting to work more on the things that give me the most frustration in my life.

So today I would like to introduce to you a little project I have been slowly working on to make my environment better. To some people it isn't really new news. Its been something I have been working on for about a month now.

The project is officially called the Poo.Pi Project.

The issue at hand

Why, you ask? Because of how it is related to its job. Let me first describe the circumstances here. I work in an office with about ~70+ people 4 of which are women. There is only one floor that we coexist on. There is only 1 restroom for the men and 1 restroom for the women. There are numerous ways to get ahold of liquids, including a coffee machine that can fold your clothes. For the Women's restroom there are 3 stalls. For the Men's there is 2 urinals and 1 stall.

Lets say that there are a total of 70 men working here. If we all take about 10 minutes each to do our business, it would take ~11 hours to do it. But that is also assuming that we are able to queue ourselves perfectly one right after each other. Since we have no notification system of letting each other know when that person on the pot is done, the time will only ever go up. Do you see the issue?! If you don't then just know this is an issue!

The Poo.pi project is built from a Raspberry Pi and it is using Python and Node.js. I am using a logical door switch to detect when the stall is closed or open. For development I am using a non-soldering breadboard. 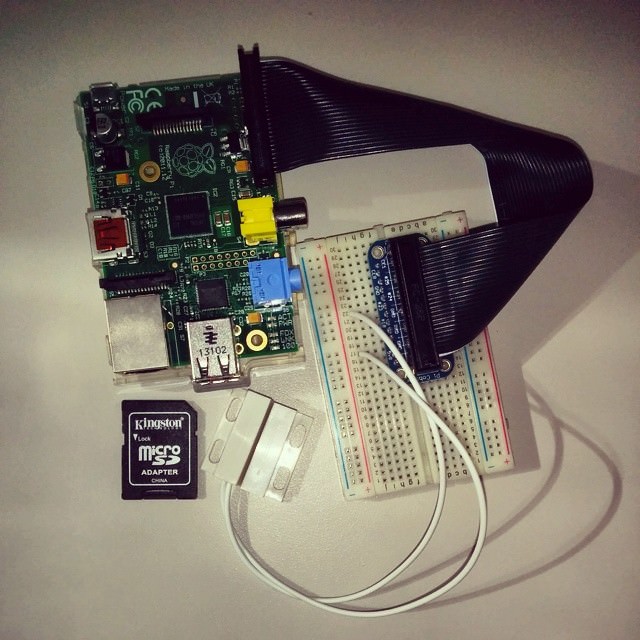 The entire purpose of the Poo.pi project is to have a central hub to which people can access from the web to see if the stall is available. There have been too many times that I have got up to solve the call of nature to only find that the stall is closed until further notice.

I also wanted to venture a little further with hardware and software so building this project with a Raspberry Pi - in my mind - was more than perfect. The Raspberry Pi is fairly inexpensive and all the external parts weren't more than $40. The Pi is also known for doing home automation projects so I know there is support out there for what I am doing.

Some ideas people have passed along to me while working on this project:

Of course all of these should be anonymous because I wouldn't want personal attacks and ridicule for those who may be sensitive. So I might only do something along the lines of "It takes 5 minutes for a Towers Watson employee to do their duty"

The current state of the project is a little bleak. It isn't that I haven't progressed. I actually have the python code set up and it is reading the door sensor fine. Its that I broke my Pi by transferring it back and forth between work and home. The only thing I have left to do is host the web server and setup the interface to communicate with the python logic.

I have blogged quite a bit in the past. You wouldn't know that I have off this blog, but I have had multiple blogs to which I have written multiple

One of the many reasons why I really like working for Towers Watson is being able to expand my knowledge and grow. It has been quite challenging because who am I to be teaching something to some of these very seasoned developers? Regardless I